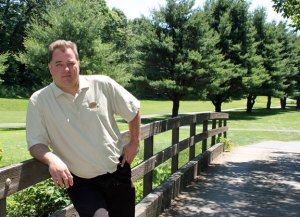 Bob Clark returns to Timberlin for his third season. Born and raised in Watertown Bob was a member of the Sacred Heart High School golf team in 1988 when they made the CIAC golf tournament for the first time in school history. In 1988-1990 he attended New Hampshire College, now known as Southern New Hampshire College where he played NCAA Division II baseball . In 1992 Bob was the winner of the Town of Watertown Golf Championship. He followed that up with qualifying, as an amateur, for every CSGA amateur major championship. But this was only the beginning of a career change.

In 2005, he was hired by Rock Ridge Country Club in Newtown to be the outside operation manager on the agreement he would participate in the PGA of America Professional Golf Management program as a home study program. In August of that year Bob passed his 36 hole playing aptitude test to be entered as a class B apprentice in the PGA of America. In March of 2012, Bob graduated from the program and in May he was elected to membership of the PGA of America.

Bob was the head golf professional at Hop Brook Golf Course in Naugatuck from 2012-2016, as well as the head golf coach of Naugatuck High School in 2015 and 2016, where he led these teams to the Naugatuck Valley League Tournament both years. In 2017 Bob was the head golf professional at Minnechaug Golf Course in Glastonbury. At both courses, Bob revamped both junior golf programs as well as developed golf programs which helped both golf courses become profitable. Bob is very excited in assisting both the golfers of Timberlin as well as the staff in continuing to make Timberlin the best municipal 18 hole golf course in the area.

In his tenure as a class A professional, Bob has served on the Connecticut PGA Board of Directors from 2014-2016 as well as 2019. Bob was a volunteer for the PGA Junior National Championship, captained two PGA Junior League All Star teams, and was a finalist for the Connecticut PGA section Assistant Golf Professional of the year in 2019. He also volunteers as a coach in the Naugatuck Basketball Association and has coordinated the Stuff-A-Cart Thanksgiving food drive, which in eight years has fed over 250 families who could not afford to celebrate the Thanksgiving holiday. While doing all this, Bob managed to finish in top 50 PGA Omega player of the Year Points the last two seasons

Bob is a resident of Naugatuck with three kids Robbie age 24, Stephanie age 20, Thomas age 19, as well as his wife Katherine.